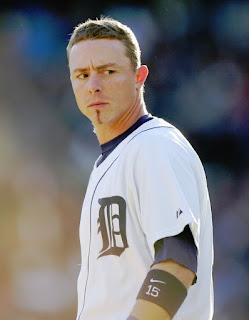 Brandon was, is, one of my absolute favorites.  How can that be, one might ask (even me), when you see his .234 career batting average and a frustrating number of strike outs.  Well, he'd been with the Tigers for 12 years, and they were the only team he ever played for.  He was there in 2003 (I think it was) when they lost 119 games, a truly bad ball club; but he was also there in 2006 when they made it to the World Series (defeated by St. Louis).  Originally a catcher, he was forced to switch positions when a certain Ivan Rodriguez showed up in Detroit.  Brandon never complained, just moved over to 3B where he made spectacular play after spectacular play.  In 2007, Curtis Granderson, the center fielder at the time, opened the season on the Disabled List.  Brandon played CF on opening day (if he'd EVER played out there before it's news to me) and, in the 9th inning, threw out a potential go ahead run at the plate.  Last year his time became limited (a batting average in the .190s will do that, not matter how good the D) and, with the arrival this year of Prince Fielder, and Miguel Cabrera's return to 3B, there was just no place to put him and live with his low production.

He unabashedly loved the city and people of Detroit.  He loved playing for the Tigers.  In interviews, he was charming and articulate.  He always hustled his ass off.  Last year, when they sent him, a veteran, to the minors in the late summer to work out his shit, his first comment was, in essence, "I hope I can work my shit out so I can come back and help the Tigers".  And there he was in last year's post season, appearing in 6 or 7 games (in a limited role, to be fair), and contributing a batting average of over .300 (with a few walks), a couple of doubles, a couple of RBI, and scoring six runs.

Yesterday, after his release, more of the same class when he said (again, in essence), "No hard feelings, I wasn't producing.  I will always be a Tiger, this is my home.  I hope they win it all this year."

And, finally, this - a few years ago in New York I saw a random interview with Brandon on some sports network (possibly during a rain delay), and he spoke about the work he did with children with cancer, visiting them in the hospital, playing catch and like that (an easy gig, no doubt).  So, as these things happen (and I can't remember if the kids initiated this, but I'm pretty sure they did), on two occasions he promised a child that he would hit a home run for them that evening.  And the man who hit 140 homers in 12 seasons delivered both times.  He could barely speak as he tried to describe how important this was to him.

I will miss seeing his name in the Detroit box score, and watching him glide into second (in the home whites, of course), after doubling in two.