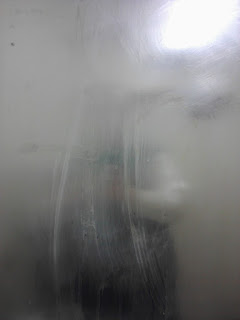 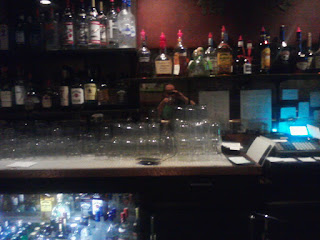 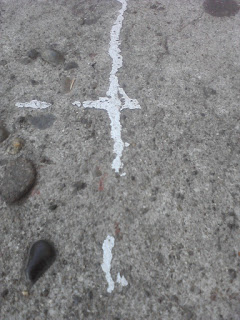 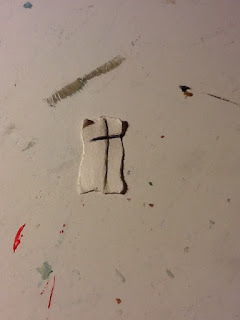 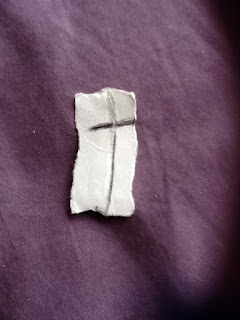 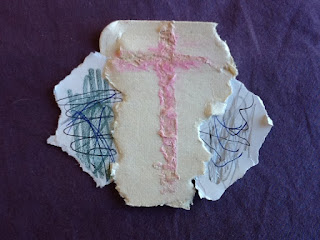 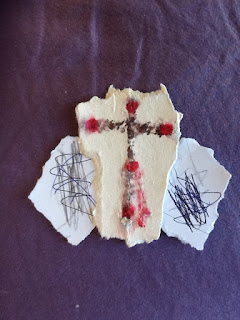 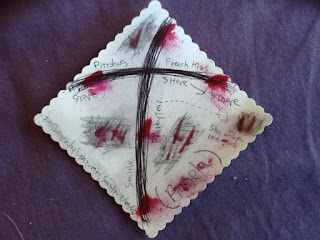 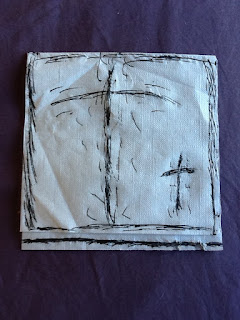 "Not So Much the Agnew Watch" 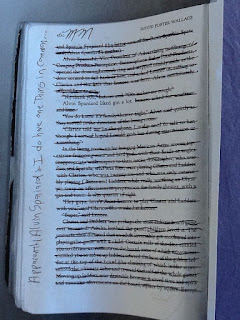 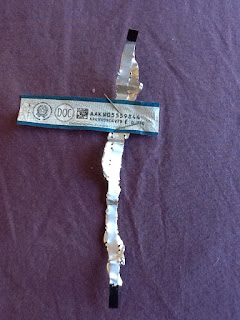 A Taste of the Funny - In An Elevator

A very clever and funny thing to say, when you are in an elevator and you are headed down to the ground floor and the elevator stops over and over again - it seems like people are getting on and off at pretty  much every floor - well, then a very clever and funny thing to say when you have the chance and especially if it's quiet in the elevator car, a funny and clever thing to say is to wryly say, "Hey, I didn't mean to get on the local!" (or some variant of that), because the implication then is that you had a choice when you entered the elevator car, like with a bus, say, or maybe a subway route, to take EITHER a local or an express, and so then you'd be implying via this wry statement that, having it do over again or if you had your druthers etc., you'd have chosen to take an express rather than the "local" referenced in the wry statement, because the "local", of course, would have fewer stops and fewer people getting on and off and you would get to the ground floor faster, like an express bus, say, or maybe an express subway route would get you to your final destination faster.

Geoff Bankowski Sent Me a Cross... 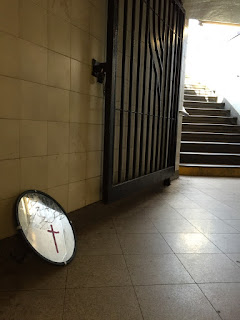 ... a lovely little cross he snapped at the Utica Avenue Station in BedStuy, Brooklyn, around March 16th, 2016.

Again, thanks to all, and keep those cards and crosses coming!

Peeber Sent Me a Cross 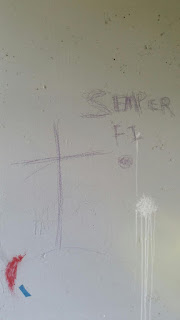 People send me crosses on occasion, and photos of crosses.  Kayne Doumani has, for example, and Cat Howard/Gil Batzri.  Alice Rudolph has, and Nate McFadden.  You could too if you got a wild hair.

Sadly the identity of the original artist here is not known to us, but we do know that Peeber snapped this photo today on a hiking trail under a freeway overpass near Lafayette, California.  And we so thank him for this, we truly do. 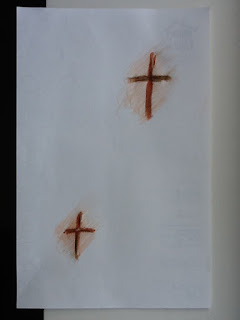 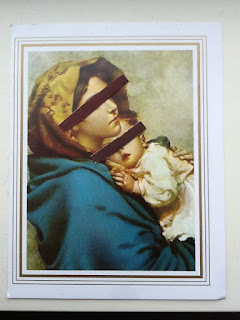 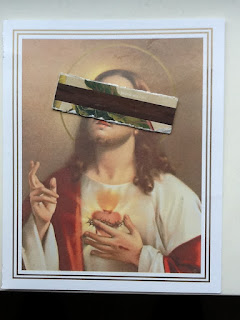 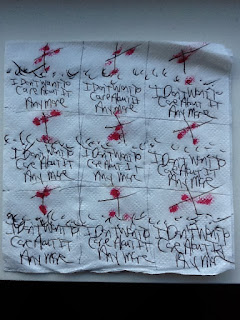 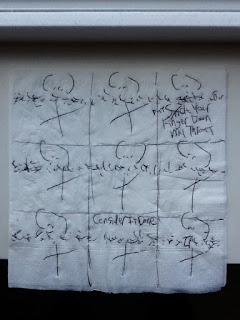 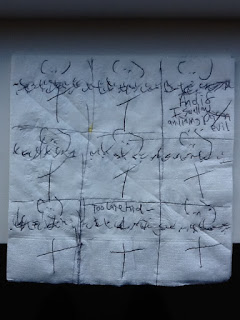 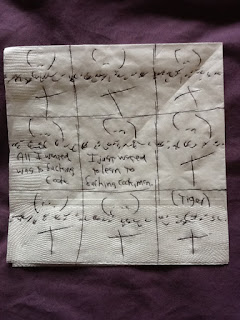 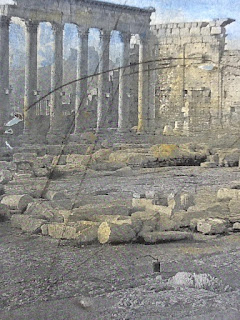 On Saturday evening, April 18th, 2015, I was sitting at the bar in the Smoke Shoppe in Ballard, Seattle, and the jukebox went quiet, so I thought I might put a couple of dollars in and play some Delbert McClinton, Texas Tornados and likely some Hank, because the Smoke Shoppe has a good jukebox like that.  But before I could push off my stool, the bartender, Marsha, pulled some money out of the register and gave it to a gentleman who was sitting alone at the end of the bar, and she asked him to play some songs, and that is what he did - "Eight Days a Week", Cocker's version of "With A Little Help From My Friends", "Dock of the Bay" among others.  In truth, I generally enjoyed his choices.

But what happened next was that the guy felt it was appropriate to talk about each song as it came on - mind you, not addressing anyone in particular - providing all sorts of useful trivia, such as - "When Cocker would hold that microphone sometimes it looked like he was giving it fellatio." (Not sure we'd heard him the first time, he repeated this.)  It should also be noted that (of course) he sang along with each song when he wasn't busy talking over them with important and informative liner notes.  (His lyric recall was maybe 60-40 to the good.)  But so anyway "Dock of the Bay" comes on and he sings along and when it's over, in the dead quiet of the bar as the jukebox was queuing up the next track, he says this -

(Please believe me when I say I would never lie to you.)

Oddly, it wasn't the fact that this gentleman had horribly botched a fairly famous piece of American musical history (Otis Redding died in a plane crash, of course) that bothered me most, it was this "San Francisco Bay Club" reference.  Having lived in San Francisco for 18 years I was pretty sure there was no such place now or then (I subsequently did an on-line search and couldn't find a trace of it anywhere (though maybe if I'd added "Otis Redding -final show - suicide"...)).

Next, after a pause, Marsha, who is a good woman, said, "Oh yeah, that's right.  I forgot about that."

Later, he got into a verbal spat with two women sitting near him when he identified a Tommy Raye song as by Roy Orbison.  Fed up with him by then (and I'd seen this coming for awhile), they actually challenged him on this more minor mistake, to which he responded, "Well it sure sounds like Roy Orbison."  (To me it sounded like Buddy Holly.)  But the women ganged up on him and said, "What's wrong with you that sounds nothing like Roy Orbison."

And that was the end of the evening's bonhomie from the gentleman's point of view.  Miffed by the women's treatment, he spent the rest of his time in the bar (about 45 minutes) talking loudly on his cell phone so that no one could enjoy the music at all. 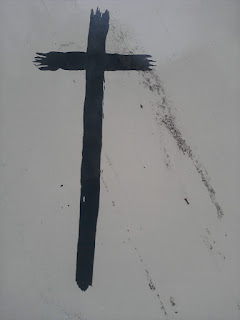 An original IBL photograph taken Thursday afternoon, December 24th, 2015, in Pioneer Square, Seattle.  It is a close-up of a detail from a public piece of art titled "Night", by the artist Edgar Heap of Birds.  I do  not believe the smear of grime was part of the original sculpture. 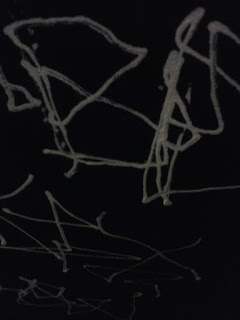 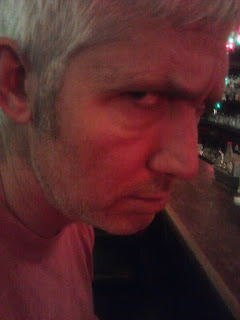 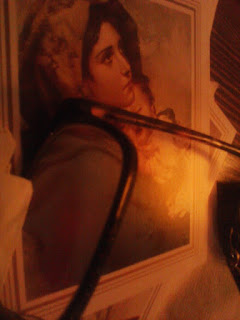 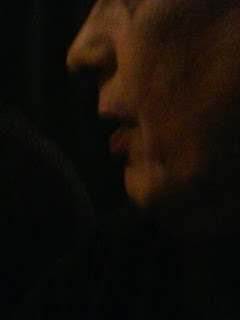 Why Is It You Would Have a Blog and Then Basically Not Post To It on a Regular Basis?


These and, hopefully, other questions answered right here at Infection By Light in 2016.