"Have You Ever Felt So Used Up As This" 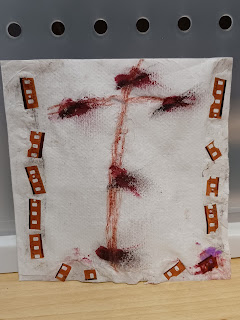 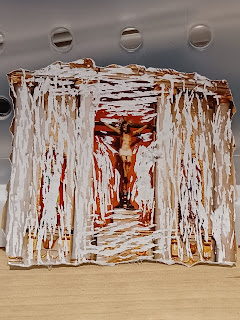 During the AIDS crisis of the late ‘70s and into the ‘80s, Right Wing pundits and so-called Christians, my mother among them (“Michael, if you defy Mother Nature, Mother Nature is going to push back.”), claimed that AIDS was God’s will, that He was targeting gay men for their perversions.  For a time in the late ‘80s I  worked in a methadone clinic in Santa Cruz, California, and interacted with IV drug users five days a week, including one short-haired blonde woman named Wendy S., who tested positive for the virus and then desiccated before our eyes.  One morning she shuffled up to the dispensing window with straw hair and blue lips, and the nurse was so alarmed she called 911.  Wendy was just shy of forty, and we didn’t see her again.

At that time, I remember thinking that the pundits and so-called Christians, for the most part, didn’t push an equal narrative about God’s retribution against IV drug users, perhaps because it wasn’t a 1:1 fit with that particular Culture War, which they still haven’t given up forty years later.  Then there was the notion that God would target humans – that seemed very un-New Covenant, and appeared to fly in the face of redemption, and a Loving God.

I also thought, If God is targeting gay people, why are lesbians getting a pass? The transmission rate among lesbians was a fraction of the rate in the male gay community; wouldn’t lesbians be their equals as sinners, and shouldn’t God’s AIDS-Wrath have rained down on them as well? One evening, re-watching “Being There”, with Peter Sellers as Chance the Gardener, who liked to watch, it came to me - God, at His core, was nothing more than a typical red-blooded American male,  and He loved Him some girl on girl action.  It was just the fags He hated.
Posted by IBL:mm at 1:49 PM No comments:

not my job to explain it,

it's your job to learn. 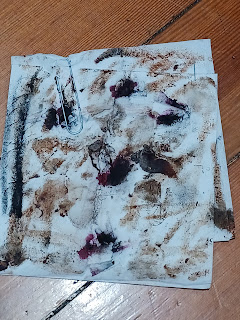 Pen, pencil, lipstick, charcoal, crayon and melted chocolate on cocktail napkin, with paper clip and one staple attaching to second napkin, 5.5 x 5.5 inches, Wednesday, June 8th, 2022, Cathedral Hill, San Francisco.
I wanted to hear some Elvis Costello the other night, and I put on Blood and Chocolate, side one, track one.  And so the piece in the blog just prior to this happened (same title), and immediately after I did this.  Which I much prefer to the previous, but it was nice for me to see the leap between the two.
IBL:mm
Posted by IBL:mm at 10:08 AM No comments: 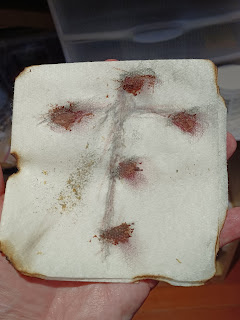 Pen, pencil, shaved pencil, glue stick, cellophane tape, lipstick, charcoal and melted chocolate on burnt cocktail napkin, 5 x 5 inches, Wednesday, June 8th, 2022, Cathedral Hill, San Francisco.
I wanted to hear some Elvis Costello the other night, and I put on Blood and Chocolate, side one, track one.  And so this happened and, immediately after, the next entry in this blog, too.
IBL:mm
Posted by IBL:mm at 4:31 PM No comments:

One From Danielle McArthur, One From Infection By Light 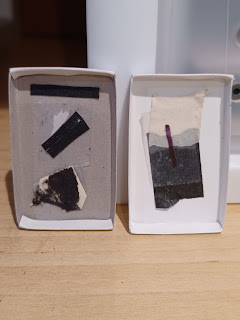 On the left, "Easter Island" by Your Humble Narrator.  On the right, "The History of the World" by Danielle McArthur. Both from Tuesday, May 31st, 2022, Cathedral Hill, San Francisco.  For Danielle's piece, I suggested she put it in the matchbox, as I have done with things in the past (and, of course, right here, too).  I also suggested the title.  They aren't very big, no more than 2.5 x 2 inches, and mostly it's tape - cellophane, painters', masking.  And that's all I got, and now you know.
IBL & DM:mm
Posted by IBL:mm at 2:54 PM No comments: